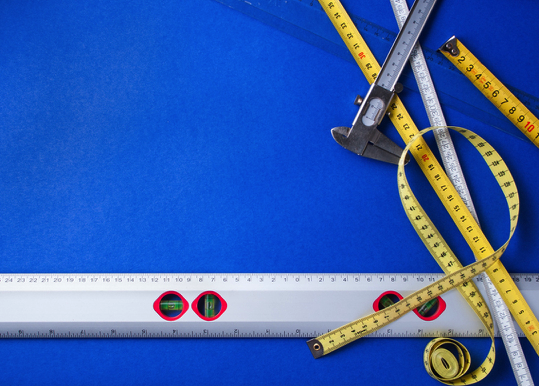 THE SAME RETIREMENT IN FEET AND METERS

Both the English and Metric systems provide accurate measurements of distances, and volumes, but most Americans find it difficult to convert from one system to the other. For example, how far is a 26.2-mile marathon in kilometers? Even if you know that a mile equals 1.6 kilometers (and many Americans and that a 5k race is the equivalent of 3.1 miles, the ratio of 1:1.6 just doesn’t lend itself to quick conversion. (The answer is 42.2km).

It’s the same with other English-Metric equivalents: Is 32 degrees Celsius hot or cold on the Fahrenheit scale? What about a person who weighs 130 kilos – is that light or heavy? If we knew the conversions, 89.6° F would be rather warm, and a 286-pound person would be quite heavy. But most of us are not fluent in both systems – we can’t easily translate English to Metric, or Metric to English.

There can be a similar challenge with different financial calculations for retirement. On one hand, it may be represented as a lump sum. On the other, a monthly income. While both numbers are easily calculated, many individuals find it far more difficult to assess their relative value.

For example, look at the results from this 2016 study by Microsoft Research: 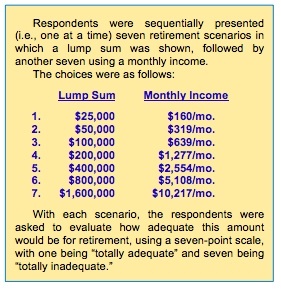 Two important facts: First, the lump sums and their corresponding monthly incomes are financially equivalent; the monthly income is derived from the purchase of a lifetime annuity using the lump sum as principal. Second, because each scenario was presented separately, respondents couldn’t see the side-by-side progressions as listed above.

As expected, the lower amounts, as lump sums or monthly incomes, were considered least adequate; $25,000, or $160/mo., isn’t much of a retirement. However, at the lower numbers, lump sums were seen as “more adequate” than the equivalent monthly income. But as the amounts increased, the monthly income choice became more desirable.

The title of the study, “The Illusion of Wealth and its Reversal,” suggests an explanation for these results. When one option among two financially equivalent choices is seen as more adequate, this is an “illusion of wealth.” Like our struggle to make English-Metric , we over- or under-value one option because we lack the ability to easily think of one in terms of the other.

This not only explains the illusion of but also its “reversal,” where monthly incomes have the illusion of wealth at higher numbers. Most households have a much greater financial sensitivity to monthly expenses; it’s their “English” way of measuring money. Even at higher monthly incomes, like $5,000 or $10,000, we still have a strong sense of their value.

At the same time, we have a less sure feel for lump sums. From our “English” perspective, we know $160 a month is not adequate for retirement, but $25,000? As a bonus check, that could feel substantial for many households, and convince us that it’s worth more than a measly $160/mo. Except it’s not.

And as the numbers get bigger, most people lose all lump-sum fluency. They know $1 million is a lot of money, but so is $2 million, or $4 million. But how it translates to monthly income, they’re not so sure. Consequently, the illusion of wealth tips toward monthly income.

The Perils of Inaccurate Conversions

While a majority of respondents saw monthly incomes as more adequate at higher levels, some did not. And that speaks to another finding from the study: how you view lump sums-vs-monthly incomes likely impacts both your saving and spending.

In 27, 2017, Wealth Management feature produced by the Wall Street Journal, two of the researchers involved in the Microsoft study commented on these ramifications, using a retirement example of $1 million vs $5,000/mo., beginning at age 65. (In the Microsoft study, retirement started at 68, which resulted in higher monthly incomes per lump sum.)

Another Odd Piece of the Annuity Puzzle

In the Microsoft study, the monthly option is a lifetime income, i.e., an annuity, which means the retiree receives a monthly check as long as they live. That’s different than selecting a lump sum, where there’s a chance of outliving your accumulation.

This preference for monthly income is another twist on the psychology of what’s called the Annuity Puzzle. Since at least the mid-1960s, economists have produced analyses showing that retirees should convert more of their assets to annuities at retirement because the strategy eliminates the risk of running out of money while offering comparable income. Bob Seawright, in a February 2012 ThinkAdvisor article, says annuities are 25-40 percent cheaper than do-it-yourself options (like drawing from a lump sum). Richard Thaler, a noted financial behaviorist, is another annuity advocate: “You increase consumption and eliminate risk at the same time…Who says there’s no such thing as a free lunch?”

But despite clear evidence of the value of annuities, relatively few retirees choose them. They are reluctant to make the irrevocable decision of handing a lump sum to an insurance company, then possibly dying before life expectancy and perhaps not receiving full value from their deposit.

The irony here is that people in the Microsoft study preferred annuities at higher income levels – perhaps because they weren’t identified as annuities, but defined by their income benefit. It’s another case of the financial language getting in the way of understanding the value.

Is one way of representing retirement information superior to the other? From experts, there is a distinct bias toward framing retirement in terms of monthly income. In “The Crisis in Retirement Planning,” a July-August 2014 Harvard Business Review article, Robert Merton puts it succinctly:

“Our approach to saving is all wrong: We need to think about monthly income, not net worth.”

The Microsoft study is a little less but agrees: “We speculate that perceptions of wealth as an annuity are more likely to lead to satisfactory choices because it is easier to estimate a month’s expenses than to estimate expenses over all of .That said, retirement planning today consists of two distinct phases, accumulation and distribution, with prevalent measurement languages for each phase. Accumulations are typically presented as lump sums. This is arguably the most accurate

That said, retirement planning today consists of two distinct phases, accumulation and distribution, with prevalent measurement languages for each phase. Accumulations are typically presented as lump sums. This is arguably the most accurate because the lump sum will not become income until retirement. When retirement begins, and how accumulations will be affected during the time between now and then (by investment losses, extra deposits, early withdrawals) is impossible to predict.

But since retirement planning is the process of providing regular income from accumulated assets, it is essential to have the ability to translate lump sums to projected income. Individuals need fluency in both formats.

The Microsoft study offers a simple rule of thumb for converting lump-sum accumulations into monthly income: 1/200. Assuming they begin at 65, monthly annuity payments are roughly 1/200th of a corresponding lump sum. Thus, a $100,000 lump sum yields $500 of lifetime monthly income. Or, to flip it, $110,000 of monthly retirement income requires a $2 million lump sum. The actual numbers will vary, depending on a multitude of factors, but pre-retirement, this rule of thumb offers a simple way to convert the numbers and assess your progress.

What Language Are You Using for Your Retirement Plans?

1 This Material is Intended For General Public Use. By providing this material, we are not undertaking to provide investment advice for any specific individual or or to otherwise act in a fiduciary capacity. Please contact a financial professional for guidance and information specific to your individual situation.