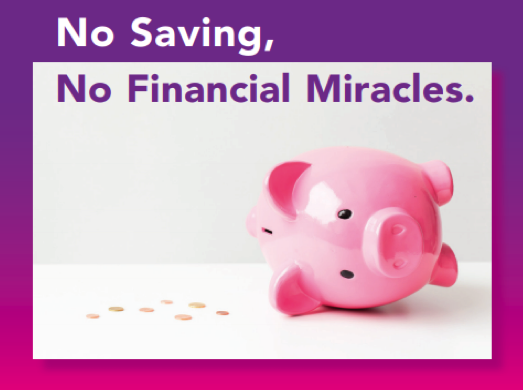 No Saving, No Financial Miracles

You’ve probably seen an illustration demonstrating the power of compound interest, how a small deposit can grow to a large accumulation earnings from one year are added to existing principal (i.e., compounded) to produce an even larger return next year, etc. In Figure 1, a $100,000 deposit earning 5% annually more than quadruples in value, growing to almost $450,000 in 30 years. 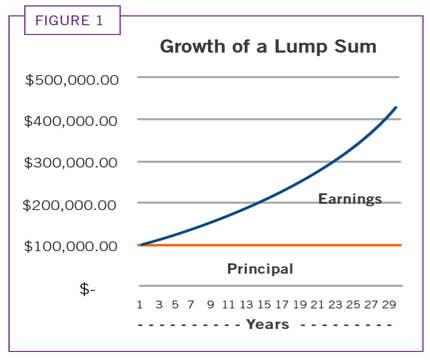 See Figure 1. Impressive, right? No wonder some people describe compound interest as a financial miracle. But as college football analyst Lee Corso might say, “Not so fast, my friend!”

Illustrations like Fig. 1 are mathematically accurate but deceiving. The “miracle” of compounding can’t occur without some long-term persistence at some very mundane activities. And because many households don’t do these things, they never experience the benefit of compounding.

For example, a well-known brochure from an investment company features a “mountain chart” similar to Fig. 1, detailing the historical performance of one of its products. In their example, $10,000 invested at the beginning of 1934 would have grown to $123,437,514 by the end of 2016. That is not a typo. Compounding took $10,000 and made it $123 million. These numbers are mind-boggling, accurate – and also perhaps impossible to because every variable has been optimized for maximum compounding.

First, the funding is up-front. Many compounding illustrations start with a significant lump-sum (adjusted for inflation, the $10,000 deposited in 1934 would be equivalent to $183,000 today). A large initial deposit maximizes potential compounding because all of the money is compounding from Day One. But if you’re just beginning to accumulate, it is more likely that your funding will consist of monthly deposits over many years, not a chunk of money at the start.

Second, the 12% annual rate of return may be historically accurate, but probably not representative of what an individual would achieve. Notes accompanying the illustration tell you that “results shown are before taxes on fund distributions and sale of fund shares.” It’s understandable that a brochure for public distribution can’t calculate individual tax costs, but taxes reduce real rates of return – for everyone.

Third, and perhaps most significant, the compounding occurs over an exceptionally long time. This illustration features an 83-year investment period in which the money has remained untouched, unspent. But who compounds for 83 years? Certainly not someone who hopes to enjoy the money during their lifetime.

While this example is historically accurate, it is not a scenario that individuals can use as a guide or benchmark.

Let’s construct a compounding scenario that might be closer to real-life.

On January 1st for the next 30 years, this individual receives a 3% raise (which matches the long-term average, per a recent study from the Federal Reserve), and increases his savings accordingly.

These deposits will compound monthly at a 5% annual rate of return. Under current market conditions, this reflects a reasonable net rate of return (in the mountain chart example, the rate of return for the past 10 years was 5.75% – before taxes). In some 5% is because the return does not fluctuate for 360 months.

Here’s what this projection looks like at several benchmark years:

Our diligent long-term saver reaches the end of 30 years with just a bit under $1 million in total accumulation. Remember, that’s saving 20% of an annually increasing income every month for 30 years. Figure 2 illustrates the compounding progression. The blue line is the total accumulation, while the gray line represents total deposits. 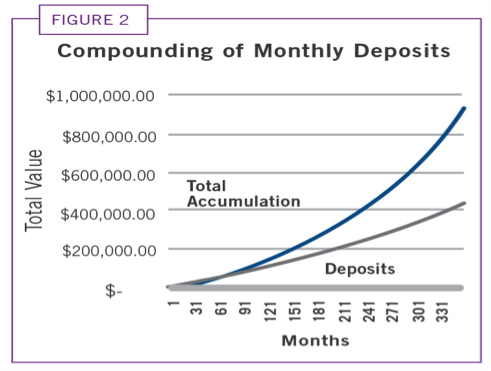 Note the differences in the graphs. In Fig. 2, a much larger percentage of the compounding is comprised of deposits. In the early years, the difference between deposits and total accumulation due to compounding is minimal. It isn’t until the last 10 years that the separation gets dramatic. Here’s a breakdown of the percentage of savings and earnings at each 10-year milestone:

In this scenario, it is 28 years, 10 months before earnings exceed deposits. For a very long time, the bulk of growth in the account comes from additional deposits, not compounded earnings. (At higher rates of return, the cross-over comes earlier, but even with a 7% rate of return, the earnings don’t surpass deposits until the 20th year.)

This is the reality of compounding: The “miracle” requires a large pile of savings to remain untouched for a long period of time. It’s not only getting the money invested, it’s being able to keep it invested. In a 30-year compounding scenario, the “take-off phase” of compounding, in which annual increases multiply rapidly, doesn’t occur until the end, which will likely be the last five or ten years before retirement. And then, instead of more compounding, withdrawals begin.

Compounding illustrations imply that time and rate of return can do all the work, turning small investments into fortunes. The math might “prove” this can happen, but the essential ingredient for a compounding miracle is robust saving. In real life, you simply don’t have time for compounding to make up for under-saving.

The sooner you save, the better your chances of receiving a compounding miracle later in life.

This newsletter is prepared by an independent third party for distribution by your Representative(s). Material discussed is meant for general illustration and/or informational purposes only and it is not to be construed as tax, legal or investment advice. Although the information has been gathered from sources believed reliable, please note that individual situations can vary, therefore the information should be relied upon when coordinated with individual professional advice. Links to other sites are for your convenience in locating related information and services. The Representative(s)  not maintain these other sites and has no control over the organizations that maintain the sites or the information, products or services these organizations provide. The Representative(s) expressly disclaims any responsibility for the content, the accuracy of the information or the quality of products or services provided by the organizations that maintain these sites. The Representative(s) does not recommend or endorse these organizations or their products or services in any way. We have not reviewed or approved the above-referenced publications nor recommend or endorse them in any way.
*The title of this newsletter should in no way be construed that the strategies/information in these articles is guaranteed to be successful. The reader should discuss any financial strategies presented in this newsletter to a licensed financial professional.