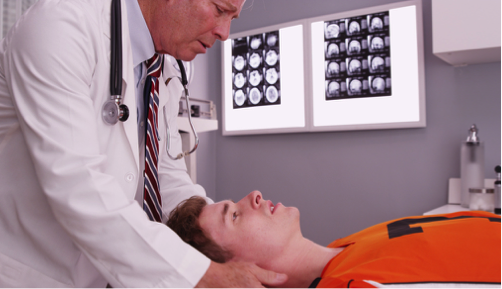 There still may be individual athletes who match the old stereotype of a dumb jock, but more and more, it is apparent that highly-skilled athletes have a far better sense of their occupational risks. In fact, you might say pro athletes have a doctor’s appreciation of disability insurance.

In its current collective bargaining agreement, the National Football League has a salary structure for rookies tied to a player’s draft position – the earlier a player is selected, the higher the starting salary. For the top tier of college players, this slotting system creates some quirky economic incentives. The better they play in college, the higher their starting pay as a pro. But if past performance has already established they will be drafted, every additional game in college has a significant because an injury could either drop their draft or in a worse-case scenario, end a lucrative career before it starts.

Take the case of Jake Butt, a tight end from the University of Michigan, who, in April 2017, was selected in the 5th round of the NFL draft by the Denver Broncos. Following his junior year, pro football talent evaluators saw Butt as a potential first-round draft choice if his skills continued to develop during his senior season. Butt met expectations, winning the Mackey Award as the best tight end in college football, setting himself up for a substantial first contract.

But playing in his last (unpaid) college contest, a postseason game on New Year’s Day, 2017, Butt suffered a serious knee injury that required surgery. The subsequent recovery period makes it questionable whether he will be ready to play when the NFL’s 2017 season begins in September.

As a projected late first- or early second-round pick, Butt was in line a guaranteed salary of around $4 million. But due to his injury and projected recovery time, he dropped to pick no. 145, where the guarantee is less than $400,000. Even if he recovers and plays at a high level, Butt’s decision to participate in what was essentially an exhibition (his team was not part of the championship playoff) was a costly one.

Fortunately, there’s more to the story. According to Darren Rovell, an ESPN writer who covers financial issues in sports, Butt secured a $2 million total disability policy prior to his senior season at Michigan, along with a $2 million loss-of-value rider. Sources said the rider, which cost roughly $25,000, was tied to Butt’s draft selection; if Butt was not picked by the middle of the third round (the 80th pick), he would receive $10,000 each time he was passed over. By falling to 145, Rovell reports that Butt is set to receive $543,000 from the policy.

If you’re doing the math, the drop from 80 to 145 is 65 places, which corresponds to $650,000, not $543,000. Several sources (including a tweet from Butt himself) indicate there are conditions which determine the final settlement. Whatever the final number, the insurance payment will restore some of Butt’s lost earnings.

The risk of injury in football is high, and these policies are not cheap. As , college athletes often borrow to pay for them, using their projected future earnings as collateral. Typically underwritten by a specialty insurance company, the application process includes an exhaustive review of an athlete’s medical history, as well as expert assessments of their professional potential.

Whitney McIntosh, writing for uproxx.com, says some college football programs tap their Student Assistant Fund, an account designated for assisting , to help pay premiums for pro prospects. In some instances, this benefit is a recruiting tool, either to induce players to or to have them stay for an additional season, with the thought of further improving their draft status (and guaranteed pay) in the subsequent year.

Even with disability insurance, some college athletes take a more drastic approach: they stop playing. Christian McCaffrey, a junior running back from Stanford, had a breakout year in and followed up with an equally impressive 2016. Even though McCaffrey had taken out a $5 million disability policy, with a $3 million loss-of-value provision if an injury dropped him lower than the 40th pick, he announced in December 2016 that he would leave Stanford, forgoing not only his senior but also not playing in the team’s post-season bowl game. Economically, the decision paid off. A healthy McCaffrey was selected eighth by the Carolina and is in line for $25 million in guaranteed money – before he plays in the NFL.

Professional athletics is a specialty occupation, with some unique disability insurance issues. But there are some interesting real-life parallels, both specifically and generally.

Prospective doctors can often secure disability insurance before they finish their residencies, based on a projected starting pay. Like college athletes, residents have yet to “turn pro,” but have shown enough aptitude and achievement to believe they will soon be profitably employed. And similar to the loan agreements for amateur athletes, many insurance companies provide financing options for residents to pay premiums before they begin their professional careers.

In addition, many of these pre-employment disability policies have riders that guarantee the right to increase coverage at specific intervals as the doctor’s income grows. Unlike the athlete who takes a loss-of-value rider to protect his first

paycheck, these riders make it possible to protect future paychecks as they get bigger.

“The Best Ability Is Availability”

A professional athlete’s lifetime earnings may be compressed into a decade or less. While this may give an athlete a better appreciation for the perils of a disability, the long-term view is pretty much the same: our lifetime economic value easily runs to several .

In pro football, there is a saying, “The best ability is availability,” i.e., you can’t get a big payday if you’re injured and unable to play. A pro may have to show up healthy and ready to work just once (on draft day) to collect a big payday, while the rest of us have to remain healthy and ready for work on a weekly basis for three or four decades to see the same benefits. But if a prospective athlete is willing to borrow to protect one big payday, shouldn’t the rest of us be willing to use a small percentage of current income to ensure hundreds of paychecks will continue for the duration of our working lives?

Disability insurance makes sense. Athletes know it, and so do doctors. What about you? Have you protected your earning potential?