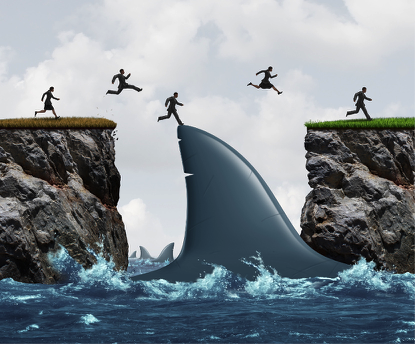 FINANCIAL IDEAS THAT HAVE “JUMPED THE SHARK”

In September 1977, the hit TV show “Happy Days” started its fifth season. Since its debut, the situation comedy about 1950s-era high schoolers had seen a once-minor character, Arthur Fonzarelli – “the Fonz” – become a pop-culture icon for his leather jacket and cool demeanor. The season-opening episode began with the central characters visiting Los Angeles, where, in response to a dare, the Fonz was about to jump a shark – wearing water skis and his leather jacket.

For many fans and critics, this ludicrous plot development marked a turning point. While “Happy Days” would continue for another seven years, they felt the show was different – and not as good – compared to the first five seasons.

In 1985, radio personality Jon Hein coined the term “jumping the shark” for the moment a once-popular TV show starts to lose its way. Today, the phrase has expanded to any event or idea “that is believed to be past its peak in quality or relevance.” Just because something has jumped the shark doesn’t mean it’s gone, or that some people don’t see in it. But as Hein put it, “You know from now on, it’s all downhill…it will never be the same.”

Hmm… “ideas that are believed to be past their peak in quality or relevance.” That sounds like a provocative starting point for some personal finance commentary. For your consideration: Two candidates from the realm of personal finance that may have jumped the shark.

Pre-tax qualified retirement plans are those in which contributions from earnings are deductible from current income, accumulate tax-free, and are taxed when distributed. This format started with the authorization of Individual Retirement Accounts in the 1970s, then evolved in the 1980s to the employer-sponsored 401(k)s and 403(b)s that predominate today.

These plans were formulated on two intriguing premises: First, employees would have control over their investment choices, with the accompanying opportunity for higher returns. Second, the expectation of lower tax rates during the distribution phase in retirement meant the tax-deferral would be a long-term economic gain for participants.

Three decades later, even though these pre-tax plans represent the bulk of employer-sponsored retirement options, there is rising dissatisfaction with the format, the premises, and the results.

First, there is ample evidence that many participants are not well-suited to managing their accounts. James Altucher, a financial professional who frequently provides commentary to mainstream financial media outlets, reports in an August 2015 article that “the average investor has returned 1.8% per year over the past 40 years.”

David Dayen, in a March 4, 2016, Fiscal Times article, echoes this idea that most individuals mismanage their retirement plans: “It may sound good to ‘control your own retirement,’ but in it just loads risk onto people without the resources to handle it.”

And it’s not just mismanagement in selecting their portfolio. Richard Eisenberg, in a January 2013 Forbes commentary, notes that at least one in four 401(k) participants “are breaking into their retirement accounts to use the money for financial emergencies and other purposes.” And workers between 40 and 59 – those closest to retirement – are the ones most likely to “breach” their accounts.

Why does this happen? Eisenberg quotes Mark Fellowes, founder of a personal finance education company: “Many have failed to create emergency savings funds outside of work, so they resort to their retirement plans to handle life’s unforeseen blows.”

Even for those who accumulate prodigious amounts, the benefits may not be there. As Altucher says, “You can’t predict your tax rate 30 years from now. This completely destroys the whole ‘tax-deferred’ argument. You don’t really know if you’re saving money on taxes or not. You are simply having your money taken from you for 30 years.”

In fact, the most prolific 401(k) savers will most likely experience higher tax rates at distribution. Their larger accumulations, combined with required minimum distributions (beginning at age 70½), give them very little room for tax management of their retirement income.

Even the most ardent advocates of government-regulated retirement plans are down on 401(k)s. Theresa Ghilarducci, a designer of “Guaranteed Retirement Accounts” which proposes to combine mandatory contributions with government-mandated portfolio management, and a stream of lifetime payments, says in a November 23, 2016, Forbes blog, “We need a new type of 401(k),” because “IRAs and 401(k) do not pay benefits for life, the way annuities and Social Security do, which is what many people want.”

It is still easy to find personal finance commentary that begins, “Why you should max out your retirement accounts.” But that doesn’t mean pre-tax qualified retirement plans haven’t jumped the shark in terms of financial relevance for many households.

Student loans for a college education

Since at least the 1950s, a college degree has been touted as the ticket to better earnings and admission to the upper-middle class. In some respects, the better earnings part is still true (Google “million-dollar difference of a college degree” for proof), but there are two qualifiers: the type of degree matters, and how much it costs to attain it. Consequently, says Thomas Donlan in a May 2015 commentary in Barron’s, “Students may find, as some of this year’s graduates have, that going to college is no guarantee of a comfortable job or entrance into the upper-middle class.”

People who blindly tout a college degree for everyone are ignoring basic economic principles of supply and demand. In certain fields, there are now more college graduates than there are jobs. Consequently, between 30 and 50 percent of recent college graduates (depending on the survey) are either unemployed or under-employed, i.e., they are working in jobs that don’t require their level of education. 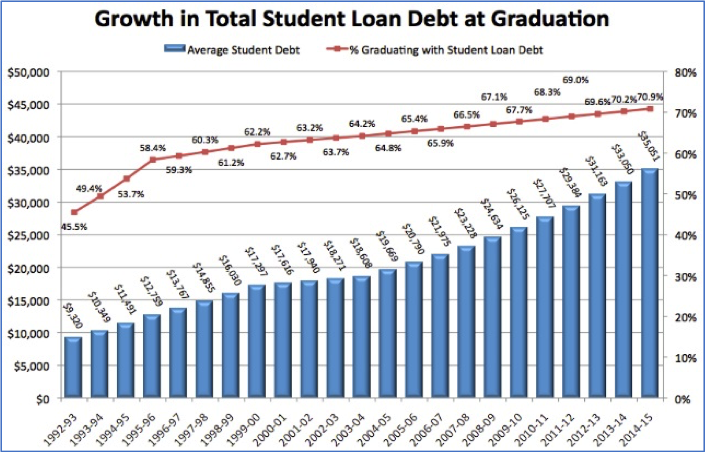 And the cost of a college education keeps rising faster than inflation, which means it’s getting more expensive to acquire a credential that may no longer deliver higher earnings. And yet, convinced that a degree is essential, more students borrow to pay for their education. A 2015 analysis by Mark Kantrowitz found that 71 percent of students borrow to pay for college. Two decades earlier, less than half took education loans.

Student loan debt (and there’s a lot of it) further narrows the economic value proposition for a college degree. This has a dampening ripple effect on the broader economy. Here’s a concise explanation provided by Patrick Watson from a November 2016 Connecting the Dots article:

This doesn’t mean a college degree is worthless. But as Jennifer Barrett writes in 19, 2015, CNBC article “College remains a risky, and expensive investment for families – one whose value diminishes if costs increase faster than wages. At some point, if tuition costs continue to climb, the benefits simply may not be worth the price of admission for some.”

As a one-size-fits-all economic solution, there’s certainly an argument that borrowing for a college education has jumped the shark.

What Hasn’t Jumped the Shark?

Referring to the challenges facing pre-tax retirement plans and borrowing for college, you know what’s part of the problem? A lack of available savings. Households don’t have enough safe, liquid reserves. They don’t have it for emergencies, so they pillage their 401(k)s. They don’t have it to pay for college, so their kids begin their adult lives with long-term debt. In terms of a topic that’s relevant to the quality of one’s financial life, savings – accessible, liquid cash reserves – hasn’t jumped the shark. If anything, it’s a topic that ought to get more attention, from the media and the financial professionals helping households achieve financial security.

Consider a two-income household with gross earnings of $120,000. Conventional personal finance metrics would recommend emergency cash reserves equal to 3-6 months of either income or living expenses. If you use the income standard, that’s $30,000-$60,000. If you remove taxes and savings to arrive at living expenses, the number is probably still between $24,000 and $48,000. So how many upper-middle-class households like this example have $50,000 or more in cash reserves?

Well, a 2014 Federal Reserve report found that only 45 percent of upper-middle-class households (defined as having incomes from $75,000 to $99,999) saved anything in 2012. And it noted that this low level of saving wasn’t just fallout from the Great Recession. In 2007, i.e., prior to the economic downturn, median liquid savings for the upper-middle class was only $7,000.

Retirement and paying for college are the highest-ranking topics for discussion when consulting with financial professionals, which is understandable because of the strong emotional responses they elicit; we want security in our old age, and we want our children to succeed. But one of the reasons these topics have jumped the shark is because we are neglecting the financial foundation of cash reserves that would make these projects sustainable. You can say it’s boring, not sexy, and too simple. But a substantial cash reserve has never jumped the shark. Ever.1

1 This Material is Intended For General Public Use. By providing this material, we are not undertaking to provide investment advice for any specific individual or or to otherwise act in a fiduciary capacity. Please contact a financial professional for guidance and information specific to your individual situation.