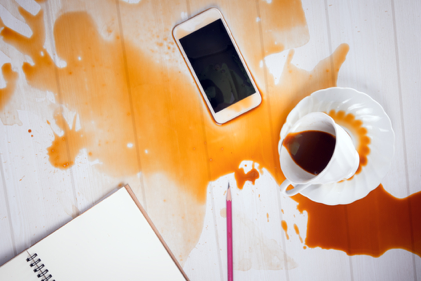 On a Saturday afternoon, your smartphone lights up with an unrecognized caller from another state. Although skeptical that it’s a telemarketer, you answer.

You hear your daughter’s voice, but this isn’t her phone number.

“Where are you calling from?” you ask.

“This is my roommate’s phone. We decided to go to her house this weekend, and when I was cleaning up this morning, I spilled coffee on mine, and now it doesn’t work.”

“Dad, how am I going to get reconnected? I can’t do anything without my phone!”

It’s true, isn’t it? Today, everything happens on your smartphone. With its multitude of features and connectivity, it’s not just a device for calls and texts. It’s your e-mail, calendar, Internet connection, camera, electronic boarding pass, and personal banking station. For many of us, smartphones have become our interface for all things social, academic, work-related, and financial. So, when your connectivity gets doused because of a malfunctioning smartphone, you’re really disconnected from life.

And that brings up an interesting personal finance question:

Is your smartphone an asset worth insuring?

The price of any insurance is correlated to the likelihood of an incident, and how much it will cost to restore or replace the loss; higher premiums (relative to the object or event insured) reflect the greater likelihood of a claim. For smartphones, there are two distinct losses, the device and the data stored in it.

In the past few years, expanded Internet capabilities in smartphones have resolved many of the data and security issues because contact info, and other personal data are often archived online instead of in the device. These items can be quickly accessed and transferred to a new phone in the event of a broken or lost device. Kill switches, which can remotely deactivate lost or stolen phones, have proven an effective deterrent against data thieves. (Thefts have decreased each year since 2013.)

The biggest problem is damage to or loss of the device. And in comparison to other insurable property, the likelihood of losing smartphone connectivity due to theft, damage, or malfunction is quite high.

Consequently, the cost of insuring a smartphone, when calculated as a percentage of its purchase price, can be fairly steep. While a $250,000 home in many locations might reasonably be insured for a cost of less than one percent of its value (i.e., $2,500 or less), the percentage is somewhere between 25% and 50% for a smartphone. A $500 device could easily cost $250 to insure during its two to three years of active use.

Providers. Most wireless service providers offer insurance for new devices at the time of sale. This coverage usually must be obtained within 14 to 30 days of activation. Consumers can also purchase similar device-specific insurance from outside insurance companies. It may also be possible to include the device under the “contents” coverage in a renters’ or homeowners’ insurance policy.

Provisions. Standard protection obtained from wireless service providers typically covers accidental damage, out-of-warranty malfunction, loss and theft. Homeowners’ and renters’ policies insure possessions, including smartphones, but only if they’re stolen or damaged by a covered event, such as a fire.

Almost every insurance plan includes a deductible. For wireless company plans, these range from $50 to $200. On a homeowner’s policy, it will be the standard deductible, typically $100-$500.

Some plans make good on the loss with a replacement of the same model, which may be either new or refurbished. Others make a cash settlement, based on the age and model of the device.

Premiums. In purchase contracts where the price of the phone is folded into a monthly service bill and amortized over the term of the contract, the insurance is added in the same manner. A sampling of monthly fees at the end of 2016 ranged between $8 and $15/mo. and is typically applied over a two-year period to match the payment plan for the smartphone. Most providers and outside insurers also offer a single premium payment option, with a range of $80 to $150. Adding a smartphone to one’s renters’ or homeowners’ insurance may be less than $10/yr., but the much lower premiums reflect the restrictive conditions under which a claim may be paid.

Another Option: Buying/Keeping a Spare

Another issue for smartphones: innovation often compels owners to upgrade regularly. If you’re in the habit of buying a new device every two years, ensuring it becomes a short-term proposition: are you more likely to upgrade it before you lose or break it? For those who frequently upgrade, there may be an interesting insurance alternative.

An older, retired smartphone can serve as a backup, one that can be easily activated in the event the current model is unavailable. This single device can be the “insurance,” not just of one person, but perhaps a group of people (like a family of five, of which one person will drop a phone in the toilet).

However, keeping a spare is only a partial solution. A backup can quickly restore connectivity, but it doesn’t replace the lost or malfunctioning device.

Another Example of a Fundamental Financial Decision

But whether it’s protecting your mobile connectivity or some other asset, the fundamental insurance question remains the same: are you willing to pay to transfer the risk of loss to someone else, instead of bearing the full cost yourself?

Entrepreneur Garrett Gunderson, in his 2007 book “Killing Sacred Cows,” says people with a Producer mindset “love insurance because it transfers their risks, and they know it saves them money in the long run.” The prices established by insurance company actuaries accurately reflect the likelihood of claims and their resulting costs. In the long run, in the aggregate, insurance not only provides peace of mind but saves money.

HOW ARE YOU GOING TO INSURE YOUR CONNECTIVITY?